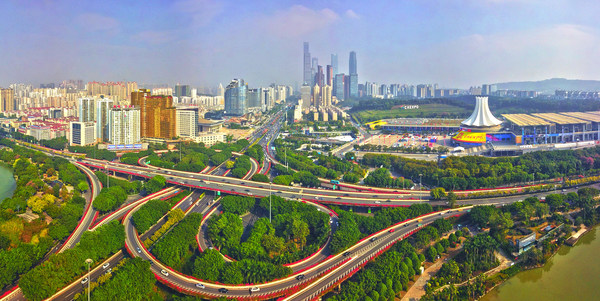 [1]
Nanning, the permanent host city of the China-ASEAN Expo.

In recently years, by firmly taking the historical opportunity of building a new western sea-land transportation channel, Nanning has made closer economic and trade as well as cultural exchanges with Chongqing Municipality and Guiyang, capital city of southwest China’s Guizhou Province, all important cities along the channel and all inland.

As a regional international metropolis open to cooperation with the Association of Southeast Asian Nations (ASEAN), Nanning has kept deepening opening-up and cooperation with other countries amid the construction of the new western sea-land transportation channel.

The city’s cross-border transport channels have been basically put into regular operation. Since the opening of the China–Vietnam cross-border direct vehicles connecting Nanning with Vietnam, 183 trips have been made, with about 1,315 tonnes of goods transported.

Besides, the China–Vietnam container trains connecting Nanning with Vietnam have made 127 trips as of October this year, while the planned trips in 2020 are 150.

Four cargo routes linking Nanning with Vietnam, the Philippines, Cambodia and other ASEAN countries have been opened, pushing up the high growth of international cargo volume.

From January to October this year, the Nanning Wuxu International Airport finished a total international cargo and mail throughput of 7,945.8 tonnes, surging by 369.6 percent year on year.

Currently, Nanning is continuously promoting connectivity construction, with the aim to vitalize the node city passage of the new western sea-land transportation channel.

As the radiated transport network with Nanning as the center and integrating land, sea, air and water transport keeps improving, Nanning’s outbound traffic capacity will be improved in an all-round way, further enhancing the city’s traffic hub status, and making it play a bigger role in deeply participating in the new western sea-land transportation channel construction by targeting to become an important hub connecting western China with Belt and Road countries.