Qingyan: How Did Korean Cosmetics Rise on 11.11

SHANGHAI, Dec. 14, 2020 /PRNewswire/ — In recent years, the claim that Korean cosmetics went from prosperity to decline has been well known. However, as the 11.11 shopping event of this year came to an end, it could be seen from the TOP 10 sales list of Tmall beauty makeup brands that representative Korean cosmetic brands Whoo and Sulwhasoo came in fourth and seventh respectively. Whoo has even entered the “CNY One Billion Club.”

Whoo has driven into the distance and OHUI has risen aggressively

In previous years, Korean cosmetics were once very influential in the Chinese market thanks to Korean TV soaps such as My Love from the Star and Descendants of the Sun, as well as the Korean wave. Later, due to the impact of “THAAD” and “Lotte” incident, the number of Chinese tourists to Korea decreased, and the cultural exchanges between China and Korea were not as frequent as before. Thus, Korean cosmetics began to decline. However, after the market precipitation in recent years, Korean cosmetics are now back on the rise significantly.

In terms of the large market pattern, although Japan has surpassed South Korea to become the largest cosmetic importing country of China, the degree of dependence of Korean cosmetics on the Chinese market has been increasing year by year. According to the Korean Cosmetics Industry Research Institute, Korean cosmetics exports topped USD 1.2 billion in 2013 and hit USD 6 billion US in 2018. China’s share of this has gradually climbed, from 39.1% in 2017 to 46.8% in 2019.

In addition, the growth of Korean cosmetics driven by the Chinese market cannot be underestimated. Amore Pacific’s third-quarter net profit fell 93.7% year on year to CNY 42 million due to the impact of Covid-19 on offline channels, the company said in its latest third-quarter report. It is worth mentioning that online sales in China grew by more than 80% in the third quarter, mainly driven by the participation of the company’s high-end brand Sulwhasoo in Tmall Super Brand Day. 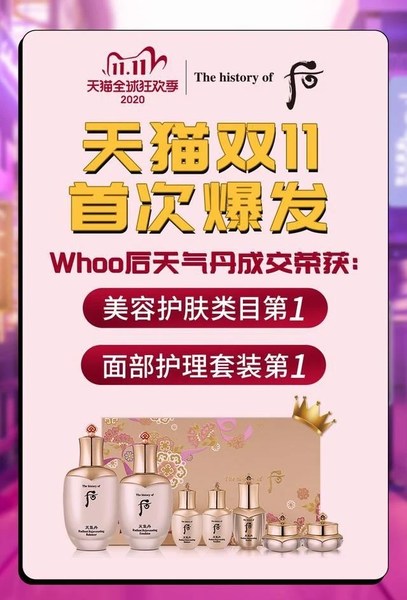 LG Household & Health Care’s cosmetic business has been doing well in China, even though it was also affected by the COVID-19 epidemic. According to the latest third-quarter report from LG Household & Health Care, its cosmetics sales in China grew by 22%. Among them, Whoo achieved high sales in Tmall Super Brand Day in August, and the single product sales ranked first in the basic cosmetics category in that month. Other data show that OHUI, which has just entered the Chinese market, saw an explosive growth of 783% on 11.11 this year.

Moreover, the popularity of signature Korean cosmetics has grown explosively. In the 11.11 event this year, the Whoo Cheongidan set, valued at CNY 1,590, became the first item in 11.11’s history to break the CNY 500 million in pre-sales. In addition to Whoo, Sulwhasoo ESSENTIAL set item also achieved fourth place in the pre-sale amount. In the end, Whoo and Sulwhasoo ranked 4th and 7th respectively in the head-on battle with a number of European and American brands.

Live streaming is just icing on the cake, and fine operation is the key

In fact, by observing the live streaming room of Li Jiaqi, Viya and other head influencers, we can find that, different from L’oreal, Estee Lauder, Lancome and other European and American brands to launch multiple products, Korean cosmetic brands represented by Whoo and Sulwhasoo mainly focus on their star items.

There is no doubt that live streaming has indeed promoted Korean cosmetic brands and won recognition from the South Korean government. As the sales volume of Korean cosmetics and small commodities doubled during the 11.11 event, Sung Yun-mo, Minister of Ministry of Trade, Industry and Energy (MOTIE), South Korea, publicly stated that the live streaming shopping had not only made cross-border e-commerce distribution platforms between China and South Korea increasingly active, but also promoted related manufacturing, service and logistics industries, which was a promotion method worthy popularizing.

It can be said that live streaming is only one of the factors, and the main factor is that consumers still have the cognitive basis of Korean cosmetics. As we all know, the previous Korean wave culture laid a good foundation for Korean cosmetics. Even though Korean cosmetics entered the slump due to various factors, with the improvement of their emphasis on quality and sense of experience, they are forming a new consumption cognition. In addition, from the perspective of the way of competition in the market for so many years, the daily operation of Korean cosmetics brands appears to be more flexible and changeable, and the operators are also more familiar with the playing methods of Chinese e-commerce platforms. In this regard, the good results of Korean cosmetic brands do not rely solely on the short-term promotion through live streaming.

From a certain point of view, the greatest advantage of live streaming is to allow consumers to quickly understand the recommended products, but it cannot become a key factor for brands to win market sales. The success of a brand depends more on good products, an excellent team, and effective operation strategies. Only by meeting these, can the brand achieve sustainable growth. Of course, effective methods for the brand and adherence to long-term fine operation are also the keys. It is worth mentioning that for Korean cosmetic brands such as Whoo and Sulwhasoo that have achieved good results in the 11.11 event this year, Lily&Beauty is the common operator behind them.

Adhering to the long-term principle, adopting targeted strategies to deeply empower the brand

In other words, the way of live streaming is indeed good for the promotion of brand voice, but regarding it as the fundamental reason for the success of Korean cosmetic brands is slightly one-sided.

Compared with traditional marketing methods, due to visualization and detailed explanation of products by professional anchors, live streaming can better present the advantages and selling points of the products. In other words, through full communication and interaction with consumers, a more benign marketing effect for the brand can be achieved. From this perspective, live streaming can truly give play to the advantages of the brand.

Otherwise, other forms of marketing are obviously better than live streaming. After all, due to the chaos of click farms, selling fake goods and buying traffic, live streaming is not as good as imagined.

What’s more, the two big Korean representative brands made great achievements together this time, which in itself shows that the success is definitely not driven by a new type of marketing. From this perspective, success of a brand has nothing to do with the brand’s nationality. In addition to the market environment and consumer recognition of the brand itself, the success is mainly due to the good marketing strategy and long-term refined operation on the brand. That’s why it was possible that Whoo jumped from No. 8 in the 11.11 event last year to No. 4 this year, and Sulwhasoo, who had never been on the list before, took the position of No. 7 in one fell swoop. It also reflects the rise of Korean cosmetic brands driven by the constant flow of new customers. 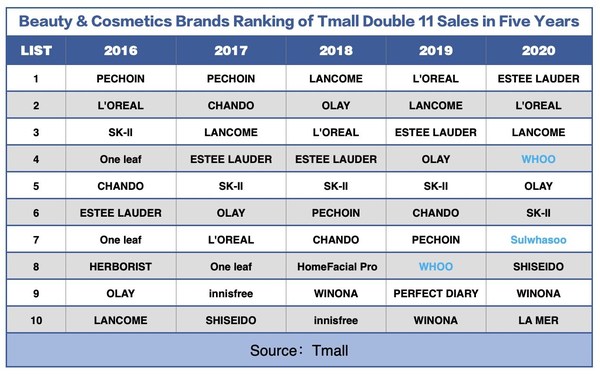 After all, in the final analysis, brands have to face consumers, so letting consumers get the most suitable products is the factor to mobilize them. Similarly, the key to the success of a beauty brand is to “sell the right cosmetics to the right people,” so that its accumulative advantage will be great.

In general, the rise of Korean cosmetic brands not only benefits from the brand-new market cognition built by themselves, but also from the operating efficiency of brand operators and their ability to accurately capture the consumer needs of the new generation of consumers. Behind this is actually a complete and targeted operation chain, and it is also the key to the rise of Korean cosmetic brands.