BEIJING, June 8, 2021 /PRNewswire/ — iQIYI Inc. (NASDAQ: IQ) (“iQIYI”), an innovative, market-leading online entertainment company in China, is pleased to announce that Memoria, a Spanish-language film co-produced by iQIYI Pictures and Xstream Pictures has been included in the official competition lineup of the 74th Cannes International Film Festival (the “Festival”). 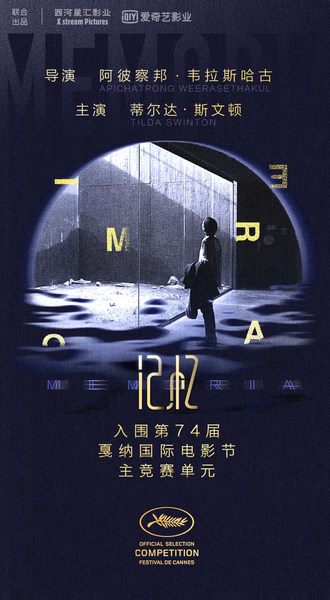 On June 3rd, Cannes Film Festival announced its 2021 lineup, with Memoria shortlisted in the official competition. The film is directed by Thai Palme d’Or winner Apichatpong Weerasethakul, starring Tilda Swinton, and with the famous Chinese director Jia Zhang-Ke serving as co-producer. The Festival will take place from July 6th to 17th, 2021.

The shortlisting of Memoria at the Festival marks the fourth time an iQIYI-produced movie is selected to compete at one of the world’s three major international film festivals. Prior to Memoria, Spycies was selected at Annecy Goes to Cannes; Pluto Moment was chosen to screen at Directors’ Fortnight; and Balloon was shortlisted for the Horizons (Orizzonti) section at the Venice Film Festival. Cannes’ main competition section is one of the most important sections of the festival. The shortlisting of Memoria once again demonstrates iQIYI’s strength in delivering films of international caliber.

Memoria, Apichatpong’s long-awaited first feature shot outside his native Thailand, is set in Colombia and stars Tilda Swinton and Jeanne Balibar. The plot follows Jessica (Tilda Swinton) who has not been able to sleep ever since being startled by a loud ‘bang’ at daybreak. While travelling to Bogotá to visit her sister, Jessica befriends Agnes (Jeanne Balibar), an archaeologist studying the human remains discovered in a tunnel under construction. Jessica visits Agnes at the excavation site. In a small town nearby, she encounters a fish scaler, Hernan (Elkin Diaz), and they share their memories by the river. As the day comes to a close, Jessica is awakened to a sense of clarity.

Xstream Pictures was founded in 2006 by Jia Zhang-Ke, an award-winning Chinese director, writer and producer. Jia is regarded as one of the most representative filmmakers of Chinese cinema. In addition, Jia has been discovering new talents and supporting their productions at home and abroad, including Hello! Mr Tree(2011), Memory Looks at Me(2012),Forgetting to Know you(2014), K(2015), Life After Life (2016), One Night on the Wharf (2018), The Calming(2020), The Best Is Yet To Come (2020) , Tracing Her Shadow (2020) and others.

iQIYI has a longstanding relationship with Jia. His films including Still Life, 24 City, Hello! Mr. Tree, Everybody’s Fine and The Continent were all released online via iQIYI’s streaming platform. Furthermore, iQIYI Film Center became one of the first alliance companies to support the talent projects of Shanxi Film Academy, a newly founded film school to which Jia Zheng-Ke was appointed to be the Dean of this April.

In the future, iQIYI plans to produce and co-produce more films like Memoria, which includes world-leading talents from different countries. When iQIYI interviewed Jia on his thoughts on the changes in the industry, he said that he would embrace new technologies while maintaining a humanistic spirit.

“Thanks to the advent of the mobile internet era, in the future, artists from different countries and regions can work together in different parts of the world to complete post-production,” Jia said.

With regards to the inclusion of Memoria in the main competition lineup, Song Jia, Vice President of iQIYI and General Manager of the Film Center, said that iQIYI hopes to forge partnerships with other top filmmakers around the world. “We will bear in mind the original intention of film creation, so that we can provide high-quality artistic films for our users,” Song said.

iQIYI is committed to investing in and creating world-class films for viewers globally. In terms of producing more content, iQIYI invests heavily in filmmaking and has also started to produce movie content. At the 2021 iQIYI World Conference held recently, iQIYI released its 2021 iQIYI Original Film List, which comprised of 33 films. These movies will be released through either theaters or online platforms.

Additionally, to support young filmmakers and talented producers, iQIYI has entered strategic collaborations with well-known filmmakers such as Ning Hao, Rao Xiaozhi, and Lu Yang. The results of these collaborations will see the Company continuing to provide users with a diverse range of high-quality and innovative film contents.

iQIYI has also built a “Cloud Cinema” platform, which allows filmmakers from around the world to cooperate. All films, intended either for online or theatre circulation, as well as films produced by iQIYI, can be distributed through iQIYI Cloud Cinema, a fair, transparent, and robust online trading platform. On Cloud Cinema, film owners can set the viewing prices for their films and users would pay a fee for access to view a single film, which enhances box office returns. Through these initiatives, the Company aims to further cement its position as China’s leading online entertainment platform.