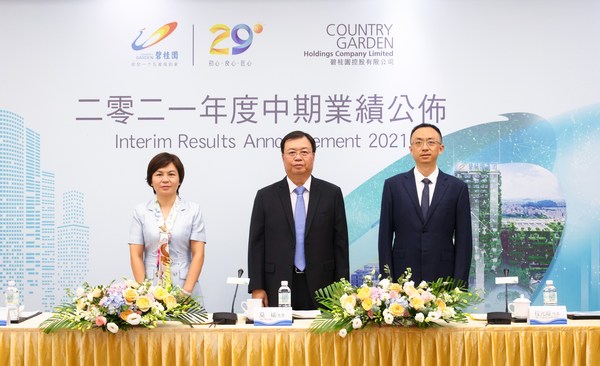 In addition to continued enhancement in performance, Country Garden’s financial position further improved. As of June 30, 2021, the company’s total liabilities stood at 324.24 billion yuan, a further drop from the end of last year. Among them, the percentage of interest-bearing liabilities due within one year fell to 27%. While keeping the leverage ratio at an industry low, Country Garden also continued to optimize its debt structure. As of the end of the reporting period, the company’s net gearing ratio had fallen to 49.7%, continuing its maintenance of the ratio below 70%, something Country Garden had achieved for many consecutive years.

With its sound operations and stable financial management, Country Garden earned recognition and support from credit rating agencies and major financial institutions. At present, both Moody’s and Fitch have given Country Garden an investment-grade rating, while, in 2020, Standard & Poor’s upgraded Country Garden’s rating outlook to “positive”, one of the highest ratings earned by a private company in China. According to Moody’s, Country Garden’s Baa3 issuer rating reflects the company’s strong brand name, good geographic diversification, robust liquidity and solid track record of resiliency during multiple business cycles, as well as sufficient land inventory, capable of supporting business growth over the next 3-4 years.

The recognition and support have allowed Country Garden to earn the confidence of more investors. During the first half of 2021, the company’s average borrowing cost dropped to 5.39%, a decrease of 17 basis points from the end of 2020. In turn, efficient financing processes and ample cash flow gave Country Garden the latitude to look for better development projects and opportunities during the market adjustment period. The improved operational strength and financial robustness have provided the backbone for the company’s ongoing healthy growth.

Country Garden’s superior performance in two of the world’s most prestigious business rankings is a further testament to the company’s strong operational strength. On August 2, the latest Fortune Global 500 list was released, with Country Garden ranking 139th on the back of its revenue of US$67.08 billion. The company has seen its ranking rise for the fifth consecutive year, advancing 328 places from its initial ranking when it first appeared on the list. In May, Forbes released its Forbes Global 2000 list, on which Country Garden landed in the 140th position, marking its 12th consecutive year.

Mr. Mo Bin, CEO of Country Garden Holdings, said that the continuation of the country’s overall effort to rein in speculation bodes well for the health of the real estate market. The real estate industry in China as a whole has entered a new stage of development. Country Garden believes that good products and services are the foundation for the sound development of the firm. For this reason, Country Garden will continue what it has been doing: doing what is best for the company’s reputation and basing every decision on what is best from a long-term perspective. The company will also continue to take a customer-first approach to every project on its roadmap, to further improve overall competitiveness throughout the whole development cycle, and make effort to build a diversified technology company that creates a happy life for the world.