HAIKOU, China, Oct. 28, 2021 /PRNewswire/ — With the booming of the Chinese economy, “Chinese Miracles” have gone deeper and deeper into the minds of people in all parts of the world through media reports. Recently, China Hainan Satellite TV’s major economic, trade and cultural exchange program “The World’s Specialty” has been launched grandly. 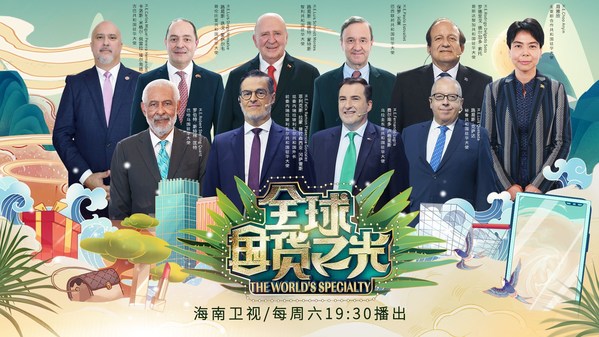 In the form of “envoy live streaming”, the program creates the “anchor + ambassador + celebrity” live streaming mode as a new way for sales promotion to attract the wide attention from all walks of life in China. By means of multimedia transmission, “The World’s Specialty” is a good try for China Hainan Satellite TV to widen the international view of the Chinese audience with global goodies under the background of China’s concept and practice of building a new type of international relations with win-win cooperation as the core as well as a “community with a shared future for mankind”. Hainan Satellite TV intends to record an opening China as a great discovery and to promote Hainan business card through conversations, so as to explain in details the great leading role of Chinese values in the world.

The program features songs and dances with national characteristics, promotion of national culture and the presentation of high-quality goodies from different countries, with ambassadors in China being invited to speak for their national specialties and national cultures. The ambassadors in the program not only introduce the selected goods of their countries and the cultural connotation behind those goodies, but also look back with nostalgia the exchanges and friendship between their countries and China and look forward to the economic and trade development between the two countries. At the same time, they probe into the uniqueness of each product with the hosts and guests to make the program enjoyable and practical.

Since the launch of the program on September 25, 2021, Ambassadors from South American and African countries, such as Uruguay, Peru, Venezuela, Brazil, Colombia, Chile, Costa Rica, Bahamas, Guyana, Cuba, Cabo Verde, Sao Tome and Principe, Egypt and Malta, have shown their talents in the program to recommend their selected national specialties. The ambassadors interact with the guests in Chinese in the program, and give improvisational performances of their own masterpieces, so as to deeply impress Chinese audiences and attract numerous fans among Chinese audiences. After the show was broadcast, it has been well received by audiences from all walks of life in China and the countries involved. The Taobao live streaming room for “The World’s Specialty”, which was broadcast at the same time, has attracted more and more fans for online shopping.

There are different themes for different episodes of this program, so as to make it more attractive. It will also launch the characteristic special mode for countries with varied styles and wonderful goodies, the screen moments of Tanzanian, Kenyan, Rwandan, Malaysian, Indonesian, Sri Lankan, Japanese, Pakistani and Nepalese Ambassadors in China are wroth expecting.

“The World’s Specialty” will be broadcast on China Hainan Satellite TV at 19:30 every Saturday night, during which the goodies will be sold online simultaneously in the Taobao live streaming room.