BANGKOK, Sept. 28, 2020 /PRNewswire/ — The British Council, the UK’s international organisation for educational and cultural opportunities, has announced the winners of the 2020 IELTS Prize. In its ninth year, the IELTS Prize has supported more than 270 students in East Asia to date; helping them pursue their dreams of studying abroad. This year, 29 prize winners in East Asia are added to the list, including three outstanding IELTS test takers in Thailand who have been awarded the IELTS Prize 2019/20 local prizes. 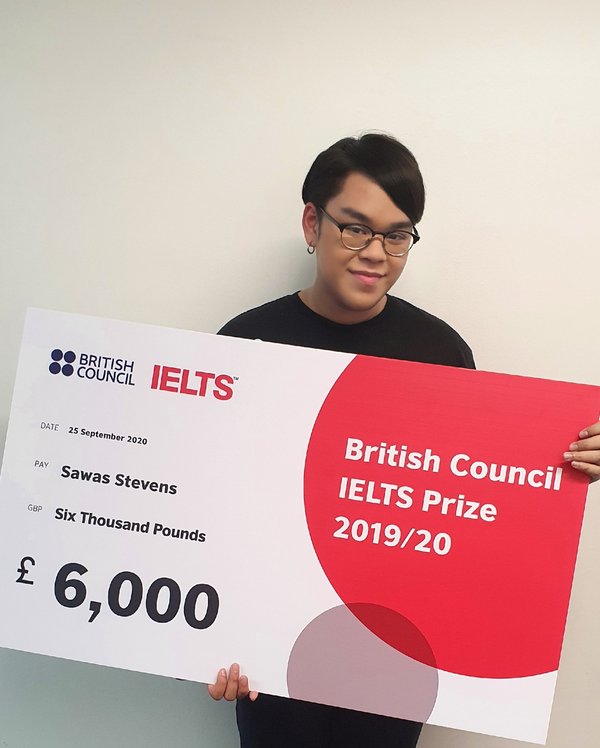 The British Council received over 1,400 applications and interviewed over 100 high flying individuals, whom not only excelled at their IELTS test, but explained their intentions to contribute to the society locally or abroad after study.

Three regional IELTS Prizes valued up to GBP 58,000 were awarded to top students in East Asia who will pursue higher education in their dream universities either in academic year 2020/21 or 2021/22. There were 26 winners from countries and territories in East Asia who were also awarded local prizes, up to GBP 129,000 in total.

Commenting on her award, Regional Grand Prize winner Hyunah Kim said, “Studying in the UK is something I wanted to achieve, and I wasn’t going to let the recent disruption stop that. Now I am heading to the UK, to study at the London School of Economics. Receiving the IELTS Prize will help me fulfil my education and career ambitions, and it gives me a lot more certainty, at what is a very uncertain time.” Regional Third Prize winner Ruey-Bin Tsai from Taiwan also highly praised about IELTS, “IELTS has a variety of question types. This makes the whole test more challenging and more fun to take for people like me who treats English more as a language than a subject. IELTS indeed opens the door for me to my dream school, University of Illinois Urbana-Champaign, in US.“

Local 1st Prize winner Khun Sawas Steven feels that, “Winning the IELTS Prize is a reward of my perseverance and my determination. The prize is a privilege and I am grateful for the opportunity the British Council has given me and how my hard work pushed me further in my achievements. IELTS Prize will play an essential part in my journey, and will contribute to my future success as a person and as a scholar.”

The COVID-19 Pandemic has disrupted study plans of millions of students who had planned to study abroad to further their academic and career prospects. East Asia is one of the largest markets for students wishing to study in the United Kingdom, North America and Australia. IELTS, the world’s most popular high-stakes English proficiency test, has been a crucial part of students’ entry requirements. Steve Adams, Director Examinations, for the British Council in East Asia said, “The IELTS Prize recognises those high performing students that demonstrate the academic excellence and commitment to excel during international study. More importantly, they show the determination to take what they learnt during their time abroad and use it to benefit their communities when they return home. It is our privilege to help these talented individuals mark their mark in the world that is rapidly changing. International study is one way they can prepare themselves to thrive in the future.”

Since 2011, the British Council IELTS Prize (East Asia) has enabled more than 270 IELTS test takers to pursue their studies around the world, including the UK, USA, Canada, Australia, and more.

The IELTS Prize is awarded to high-calibre individuals with the motivation to develop their career, to pursue an undergraduate or postgraduate degree in any chosen discipline in a higher education institution that accepts IELTS as part of its admission requirements around the world. While the IELTS Prize is not aimed at students in any one particular discipline, the British Council is eager to support test takers who demonstrate the potential to contribute to society with what they have gained from their undergraduate or postgraduate study experience.

This year, due to the COVID-19 situation, in order to cater for students’ changing plans and to better support their study dreams, the British Council had extended the IELTS Prize eligibility to those deferring their studies into the next academic year 2021/22. More information can be found at https://www.ieltsasia.org/ieltsprize.

IELTS is the International English Language Testing System, the world’s most popular English language proficiency test for higher education and global migration with over 3.5 million tests taken in the last year. Over 10,000 organisations trust and accept IELTS as a secure, valid and reliable indicator of true to life ability to communicate in English for education, immigration and professional accreditation. IELTS is jointly owned by the British Council, IDP: IELTS Australia and Cambridge English Language Assessment.

Test takers are measured in listening, reading, writing and speaking. All tests are scored on a banded system from 1 (the lowest) through to 9 (the highest band).

IELTS offers a choice of two test versions, to serve both academic and non-academic purposes. IELTS Academic measures English language proficiency needed for an academic, higher learning environment. The tasks and texts are accessible to all test takers, irrespective of their subject focus. IELTS General Training measures English language proficiency in a practical, everyday context. The tasks and texts reflect both workplace and social situations. IELTS General Training is suitable for immigration purposes to Australia, Canada, New Zealand and the United Kingdom and Ireland.

A sample of government and professional associations who recognise or require applicants to hold an IELTS test result include:

About the British Council

The British Council is the UK’s international organisation for cultural relations and educational opportunities. We work with over 100 countries in the fields of arts and culture, English language, education and civil society. Last year we reached over 75 million people directly and 758 million people overall including online, broadcasts and publications. We make a positive contribution to the countries we work with — changing lives by creating opportunities, building connections and engendering trust. Founded in 1934 we are a UK charity governed by Royal Charter and a UK public body. We receive 15 per cent core funding grant from the UK government. www.britishcouncil.org