JINAN, China and TOKYO and OSAKA, Japan, July 31, 2020 /PRNewswire/ — The “A Dialogue with Shandong” — Japan-Shandong Industrial Cooperation Conference was held concurrently in Jinan, Tokyo and Osaka on July 30, bringing together government officials and business executives across all sectors in Japan and in Shandong province for a meeting in the cloud, resulting in the initiation and, in several cases, successful conclusion of online negotiations. 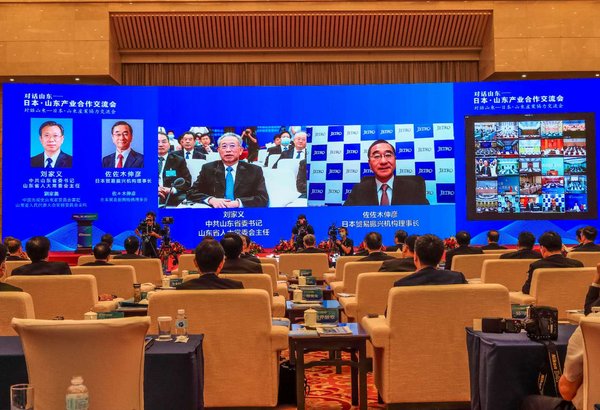 [1]
The Japan-Shandong Industrial Cooperation Conference being held concurrently in Jinan, Tokyo and Osaka

Provincial Party Secretary Liu Jiayi and JETRO Chairman Sasaki Nobuhiko exchanged ideas online. Liu said he looks forward to Shandong and Japan collaborating and creating a win-win situation in the fight against COVID-19, while, at the same time, stimulating commerce and trade, investment and entrepreneurship, technology education, healthcare and medicine, culture and tourism. Sasaki Nobuhiko expressed his gratitude to Shandong for the province’s assistance in fighting the pandemic and expressed a sincere desire that Japan and Shandong can further grow the cooperation in trade and other fields.

Deputy Provincial Party Secretary and Governor Li Ganjie said in his speech Shandong’s advantages in terms of complete industrial systems and those offered by the rapidly growing synergies between the province’s mix of emerging and traditional industries, the support provided by the province’s many forward-looking policies, and the huge market potential have all become more obvious. Shandong is willing to deepen cooperation with Japan in key industries, technological innovation, culture and tourism.

Chinese Ambassador to Japan Kong Xuanyou said in Tokyo there is huge potential for economic and trade cooperation between Shandong and Japan, holding out the expectation the two sides can expand the mutually beneficial cooperation in the marine economy, manufacturing, healthcare, culture and tourism, further promoting the development of Sino-Japanese relations.

The conference also included policy interpretation and promotional efforts on behalf of cities and companies in the two regions, with 17 projects being contracted.

Co-hosted by the Shandong Provincial People’s Government, the China Council for the Promotion of International Trade and JETRO, the “A Dialogue with Shandong” event consisted of theme seminars, a series of industry matching and exchange fairs, and Sino-Japanese city cooperation conferences, both online and offline. The event will continue until September 30.